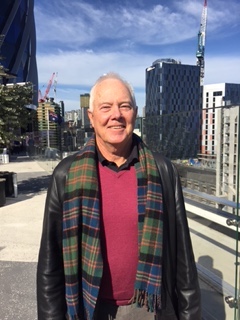 I have always been
lucky. Lucky in finding a wonderful
wife, lucky in my career, lucky with our children and lucky with my health –
until now.

I am a 70 year old
male who was lucky enough to be able to retire when I was 57 years old. When I did, I realised that this last phase
of life was most likely going to end with major health issues. I made a commitment to myself that I would
stay as fit and healthy as possible for as long as possible as this seemed to
be the best way forward towards my ultimate demise. we all know that life is a sexually
transmitted terminal disease and so the only question is the interim process of
living.

Since retirement, I
have worked at having fun in healthy pursuits including learning several new
sports. I have competed successfully in
sailing, rowing, badminton, golf and athletic throwing events. Last year, my wife and I sailed our yacht out
of Pittwater in June to explore Queensland’s offshore islands returning in
December. On returning home, little did
I understand that the small lump on my neck would turn my world upside
down.

My GP was cautious and
careful and sent me off for an ultrasound, and then a fine needle biopsy. My Christmas present was to be told that I had
non-Hodgkin’s lymphoma, possibly mantle cell lymphoma. Being Christmas, it was difficult to get to
see any specialists and so we had to wait for a long month before our first
consultation. My wife and I were not
totally happy with the first opinion and so we asked our GP for a second
referral to Peter MacCallum Cancer Centre. They accepted me and immediately arranged for a bone marrow biopsy and
PET scan. Our first consultation with
one of their Haematology Fellows confirmed that it was mantle cell lymphoma
(MCL) and that almost 70% of my bone marrow was affected. We discussed moving towards starting
chemotherapy using an aggressive protocol, but they wanted to do more tests
before starting. On the Friday afternoon
before starting chemo, they called to say that the additional tests showing
that I had a mutation on my TP53 gene and that they knew that this greatly
reduced the probability that chemo would work and hence they cancelled it.

How to treat my MCL
was an interesting discussion as there were no precedents for frontline
treatment other than chemo. The Peter Mac team had done some work on
immunotherapy, targeted treatment using two newish drugs, Ibrutinib and
Venetoclax, but only for patients who had prior chemo. they had no current trials and hence we
agreed to buy these drugs ourselves if necessary. One of the drug companies agreed to make
their drug available on a compassionate basis and hence I started on Ibrutinib,
followed 5 weeks later with Venetoclax. I developed most of the listed side effects, but they were all tolerable
with only short-term periods where they changed how I could live my life. After 15 weeks of Ibrutinib and 10 weeks of
Venetoclax, I did a new bone marrow biopsy and PET scan. I was really apprehensive ahead of these
because of this novel treatment regimen. When I got the results, I struggled to believe them. My bone marrow was now only 0.03% affected
and my PET scan was totally clear. Remission! What a wonderful word. Maybe I am still very lucky.

There is still the
question about how to go forward from here. A bone marrow transplant is on the radar and they have found 3 perfect
matched donors, so this seems like a great approach to cure an incurable
disease. There are also some new drug
options that could be an alternative as well. Only time will tell, and it looks like I might have enough time to find
out. Lucky, hey.