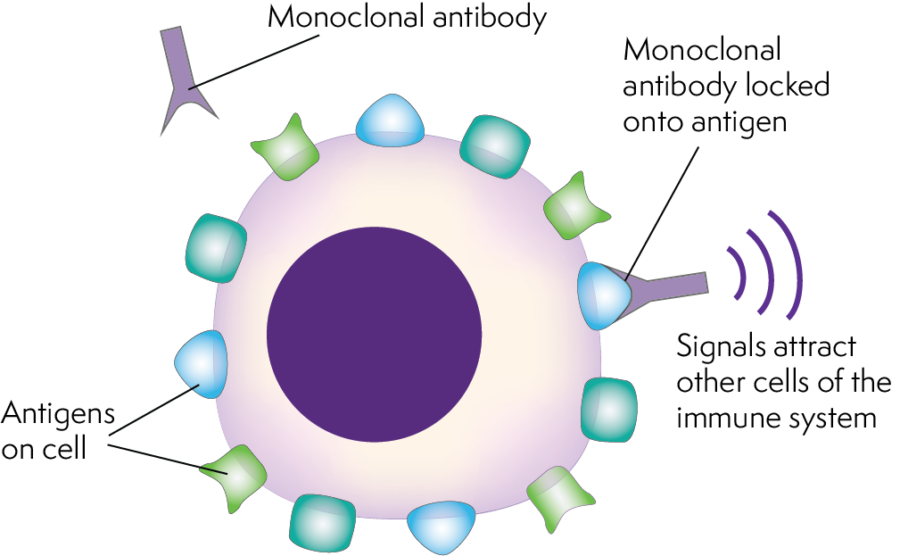 What are monoclonal antibody therapies?

How do monoclonal antibody therapies work?

One way the immune system attacks foreign substances in the body is by making large numbers of antibodies. An antibody is a protein that sticks to a specific protein called an antigen. Antibodies circulate throughout the body until they find and attach to the antigen. Once attached, they can recruit other parts of the immune system to destroy the cells containing the antigen.

Researchers can design antibodies that target a certain antigen, such as one found on cancer cells. They can then make many copies of that antibody in the lab. These are known as monoclonal antibodies (MABS).

Some MABS work by recognising specific proteins on cancer cells, others target proteins on the cells of the immune system. Each MAB only recognises one protein.

Some MABS trigger the immune system to attack and kill cancer cells. Common MABs that work this way in lymphoma include:

Some MABS work in a more targeted way. They can block signals that tell cancer cells to divide. MABS can be used to transport other therapies to the lymphoma cells. These treatments include:

How are monoclonal antibody therapy given?

Your MAB treatment may be given intravenously (infusion) or subcutaneously (under the skin). How many treatments you receive depend on the type of MAB you are receiving and your type of lymphoma.

Common side effects of antibody therapy

To find out more about the monoclonal antibody that is relevant to you click on the section below: