Burkitt lymphoma (BL) is a highly aggressive (fast-growing) B-cell non-Hodgkin lymphoma.  The symptoms often develop quickly, over just a few days or weeks. Burkitt lymphoma can cause many lymph nodes to enlarge in many different parts of the body, and often involves the abdomen and bowel.

Other organs including the spleen and liver may also be affected. This lymphoma may also be found in the bone marrow and can spread to the central nervous system (CNS; brain and spinal cord).

Burkitt lymphoma (BL) is a highly aggressive (fast-growing) B-cell non-Hodgkin lymphoma.  The symptoms often develop quickly, over just a few days or weeks. Burkitt lymphoma usually causes lots of lymph nodes to enlarge in many different parts of the body, and often involves the abdomen and bowel. Other organs including the spleen and liver may also be affected. The lymphoma may also be in the bone marrow and can spread to the central nervous system (CNS; brain and spinal cord). 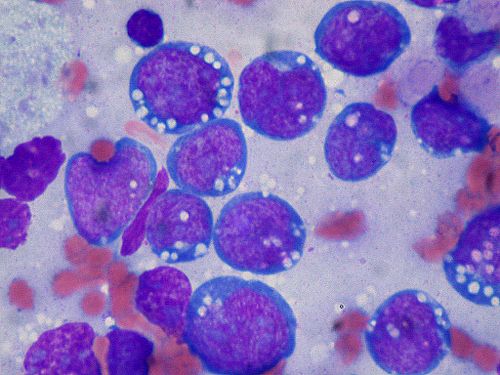 Burkitt lymphoma is named after a British surgeon Denis Burkitt, who first identified this unusual disease in 1956 among children in Africa.

BL often responds well to treatment and, in many cases, can be cured with intensive chemoimmunotherapy, which is chemotherapy with an antibody therapy.  Treatment usually begins very soon after diagnosis.

Burkitt lymphoma (BL) is a rare but especially aggressive (fast growing) B-cell non-Hodgkin lymphoma (NHL). BL accounts for approximately 1-2 percent of adult lymphomas, but up to 30 percent of childhood lymphomas.

In this section we will be discussing the management of BL in adults, as the treatments are different to that of children.

Who is affected by Burkitt lymphoma (BL)?

Burkitt lymphoma affects both children and adults and affects males three times more frequently than it does females.  BL accounts for around 30 percent of all childhood lymphomas, where it is most common in children aged between 5 and 10 years and in adults between the age of 30 to 50 years.  BL accounts for around 1-2 percent of all lymphomas and mainly occurs in adults aged between 30 to 50 years.

The cause of BL is unknown.  However, the disease may be associated with viral infections such as human immunodeficiency virus (HIV) and the Epstein-Barr virus (EBV), a common virus that can also cause glandular fever.  Not all people who are exposed to these viruses develop BL.

There are 3 main subtypes of Burkitt lymphoma (BL) that include:

Burkitt lymphoma (BL) can start anywhere in the body and can have many different symptoms.  The symptoms will often depend on where the lymphoma is in the body.  BL is often found in the abdomen that can cause abdominal swelling (caused by fluid collecting in the stomach).  The most common symptoms of BL can include:

Burkitt lymphoma (BL) can also be located outside of the lymph nodes and is called ‘extranodal’.  BL in the bone marrow can cause low blood counts as the lymphoma cells take up the space of normal cells.  This may cause:

Patients with BL often have bulky disease (large lumps or mass) as this type of lymphoma grows very quickly.

Some patients may have other common symptoms known as B symptoms, that include:

Note: it is important to remember that lymph nodes can swell for lots of reasons.  Most people with swollen lymph nodes do not have lymphoma, as they swell when we have an infection.

A biopsy is always required for diagnosis of lymphoma. A biopsy is a surgical procedure to remove part of or all of an affected lymph node or other tissue to look under the microscope by a pathologist to see what the cells look like.  The biopsy can be done under local or a general anaesthetic depending on what part of the body is being biopsied. The biopsy can be done one of three ways:

An excisional node biopsy is the best investigative option, as it collects the most adequate amount of tissue to be able to do the necessary testing for a diagnosis.

Waiting for results can be a difficult time.  It may help to talk to family, friends or a specialist nurse.

Once a diagnosis of Burkitt lymphoma (BL) is made, there are further tests that are required to see where else in the body the lymphoma has affected or is located.  This is called staging.  The staging of lymphoma helps to determine the best treatment for the patient.

There are four stages from stage 1 (lymphoma in one area) through to stage 4 (lymphoma that is widespread).

Most people who are diagnosed with Burkitt lymphoma (BL) have advanced stage disease at diagnosis, as it is a rapidly growing lymphoma.

Advanced stage lymphoma does sound concerning, but lymphoma is a systemic disease meaning it spreads throughout the lymphatic system and nearby tissue and organs easily, unlike solid tumours.

What is the ‘grade’ of lymphoma?

Burkitt lymphoma (BL) is normally divided into ‘low-risk’ and ‘high-risk’ based on the stage and other factors including:

Most people with BL have a high-risk form.  However, there are very effective treatments for BL. People with low-risk disease may receive slightly less treatment.

It is important to know the stage and grade of the lymphoma to help the medical team to know what’s the best treatment.

The scans and tests needed for staging and before treatment can start may include:

Patients may also undergo a number of baseline tests prior to any treatment commencing to check organ functions.  These are often repeated during and after the treatment has completed to assess whether the treatment has affected the functioning of organs.  Sometimes the treatment and follow-up care may need to be adjusted to help manage side effects. These may include:

It may take some time for all the necessary biopsies and tests to be done (an average of 1-3 weeks), but it is important for the doctors to have a complete picture of the  lymphoma and the general  health of the patient  in order to make the best treatment decisions

Many of the staging and organ function tests are done again after treatment to check whether the lymphoma treatment has worked and the effect this has had on the body.

Once all the results from the biopsy and the staging scans have been completed, the doctor will review these to decide the best possible treatment for a patient.   At some cancer centres, the doctor will also meet with a team of specialists to discuss the best treatment and this is called a multidisciplinary team (MDT) meeting.  The following is considered:

Before treatment is started it is important that adequate information is provided about the treatment that is planned, the possible side effects and what to expect.  Education from the cancer nurses prior to receiving treatment, can be extremely helpful and should include instructions about becoming unwell or needing medical or nursing assistance.

Burkitt lymphoma (BL) is extremely aggressive (fast-growing), where diagnosis, hospitalisation and urgent treatment is needed.  However, BL is often very responsive to the current standard intensive combination chemotherapy regimens and cure rates are high.  Treatment options are determined based on ‘low’ or ‘high’ risk status.

Central nervous system (CNS) involvement at diagnosis is recognised as the strongest risk factor for relapse (disease returns after treatment); therefore, it is recommended treatment regimens for patients who are a higher risk of recurrence include treatment to protect the CNS, which may be given intrathecally (injected into the spinal fluid).

All of the treatments used are very intensive, using high doses of medicines given very frequently.  The monoclonal antibody rituximab may be added to any of these regimens.  The standard first-line treatments for Burkitt lymphoma (BL) may include:

Different combination chemotherapy regimens are used to treat BL in children and adolescents. BL is one of the most common types of childhood lymphoma.  Younger patients tend to have excellent responses to chemotherapy and particularly high cure rates.

For this reason, current research, and studies in the treatment of children is focused on decreasing toxicity by reducing the overall amount of chemotherapy used to treat disease.

Common side effects of treatment

The medical team, doctor, cancer nurse or pharmacist, should provide information about:

Side effects of treatment

Some treatments for lymphoma can reduce fertility and this is more likely with certain chemotherapy protocols (combinations of drugs) and high-dose chemotherapy used before a stem cell transplant.  Radiotherapy to the pelvis also increases the likelihood of reduced fertility.  Some antibody therapies may also affect fertility, but this is less clear.

If all goes well regular follow-up appointments will be made for every 3-6 months to monitor the below:

These appointments are also important so that the patient can raise any concerns that they may need to discuss with the medical team. A physical examination and blood tests are also standard tests for these appointments.  Apart from immediately after treatment to review how the treatment has worked, scans are not usually done unless there is a reason for them. For some patient’s appointments may become less frequent over time

A high percentage of people achieve remission of their Burkitt lymphoma (BL) with first-line standard treatment.  However, for some people, the lymphoma returns (relapses) or in the rare cases does not respond to first-line treatment (refractory).  People with relapsed or refractory disease BL may have other treatment options (second-line treatment) including:

There are many treatments that are currently being tested in clinical trials in Australiaand around the world for patients with both newly diagnosed and relapsed lymphoma.  Some of these treatments include:

What happens after treatment?

Sometimes a side effect from treatment may continue or develop months or years after treatment has completed.  This is called a late effect.

This can be a challenging time for many people and some of the common concerns can be related to:

A healthy lifestyle, or some positive lifestyle changes after treatment can be a great help after the treatment has been finished.  Making small changes such as eating and increasing fitness can improve health and wellbeing and help the body to recover.  There are many self-care strategies that can help during the recovery phase.