MEITL was formerly known as Enteropathy Type Intestinal T-cell Lymphoma Type 2. However, it has been reclassified by the World Health Organisation (WHO) as we learn more about it. The change in classification came in 2017 and is because we now know that, unlike Enteropathy Type Intestinal T-cell Lymphoma Type 1 (now known as EATL), MEITL is not associated with previous intestinal disorders such as coeliac disease.

MEITL is a very rare, and an aggressive type of cancer of white blood cells called T-cell lymphocytes. The T-cells that are in the lining of your intestines (bowel) and parts of your gastrointestinal tract are called epithelial T-cells. This is where the name Monomorphic Epitheliotropic Intestinal T-cell Lymphoma comes from.

Unlike other blood cells, T-cell lymphocytes do not usually live in our blood, but instead are found in our lymphatic system. However, because their job is to fight infection and disease, they can travel to any part of our body including our blood, skin, stomach, organs and brain.

Intestinal T-cell Lymphomas are rare, and MEITL is one of the rarer ones. It is more common in people with either Asian or Hispanic background.

People with certain genetic mutations may also be at increased risk of developing MEITL.

Cytogenetic tests are done to check for genetic variances that may be involved in your disease. For more information on these please see our section on understanding your lymphoma genetics further down on this page. The tests used to check for any genetic mutations are called cytogenetic tests. These tests look to see if you have any changed in chromosomes and genes.

We usually have 23 pairs of chromosomes, and they are numbered according to their size. If you have MEITL, your chromosomes may look a little different.

What are genes and chromosomes

Each cell that makes up our body has a nucleus, and inside the nucleus are the 23 pairs of chromosomes. Each chromosome is made from long strands of DNA (deoxyribonucleic acid) that contain our genes. Our genes provide the code needed to make all the cells and proteins in our body, and tells them how to look or act.

This can happen if you have a mutation in a gene called SETD2 or if you have a part of one of your chromosomes (3p21) is missing.

Other changes that can happen that can result in MEITL developing is a mutation in the JAK-STAT pathway. This pathway is communication network between some of your proteins that also provide information to your immune system on how to regulate your cells and destroy cancerous ones. When there is a change to how these proteins communicate with each other, MEITL can grow.

Some symptoms of lymphoma are common in all people with any type of lymphoma, and some are related to the type and location of lymphoma you have. If you experience any of the below symptoms see your doctor for a check up. 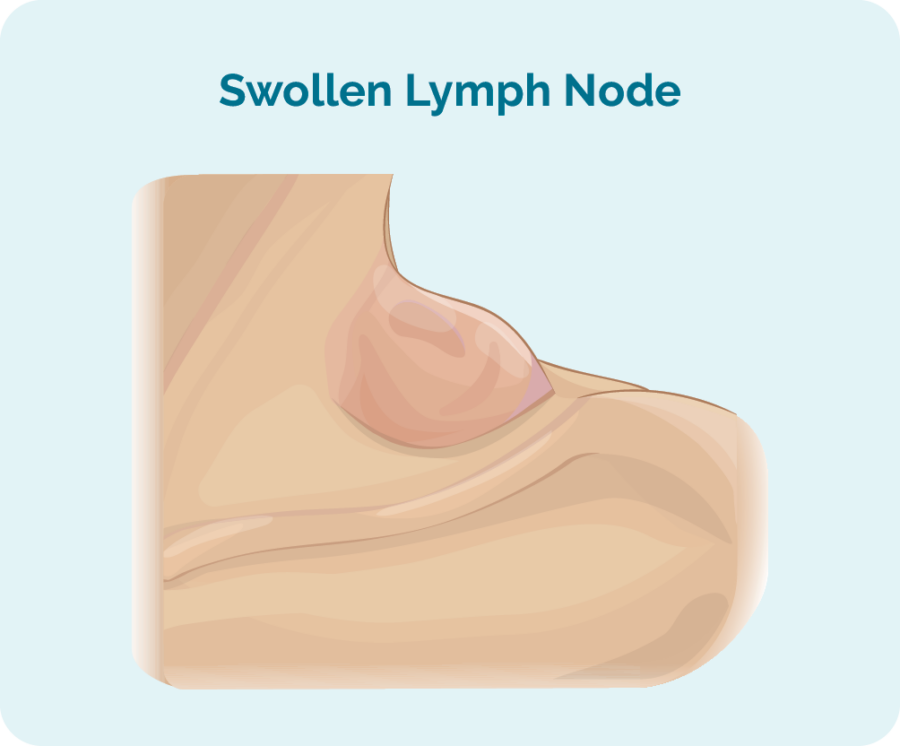 Because MEITL is an aggressive type of lymphoma, you will likely have symptoms for less than 3 months before getting diagnosed. Though for some people it can take longer. It is important to openly discuss any symptoms you have with your doctor so they can plan the right tests for you.

Your doctor will likely start with some blood tests and a stool sample (sample of your poo), to rule out other causes such as infection or allergies.

Changes to your blood tests

If you have MEITL some changes in your blood tests may include:

There are other reasons that can cause similar changes in your blood tests, so it is important to talk to your doctor about all of your results.

There are many different tests and scans your doctor might recommend for you to help diagnose, or stage your MEITL. 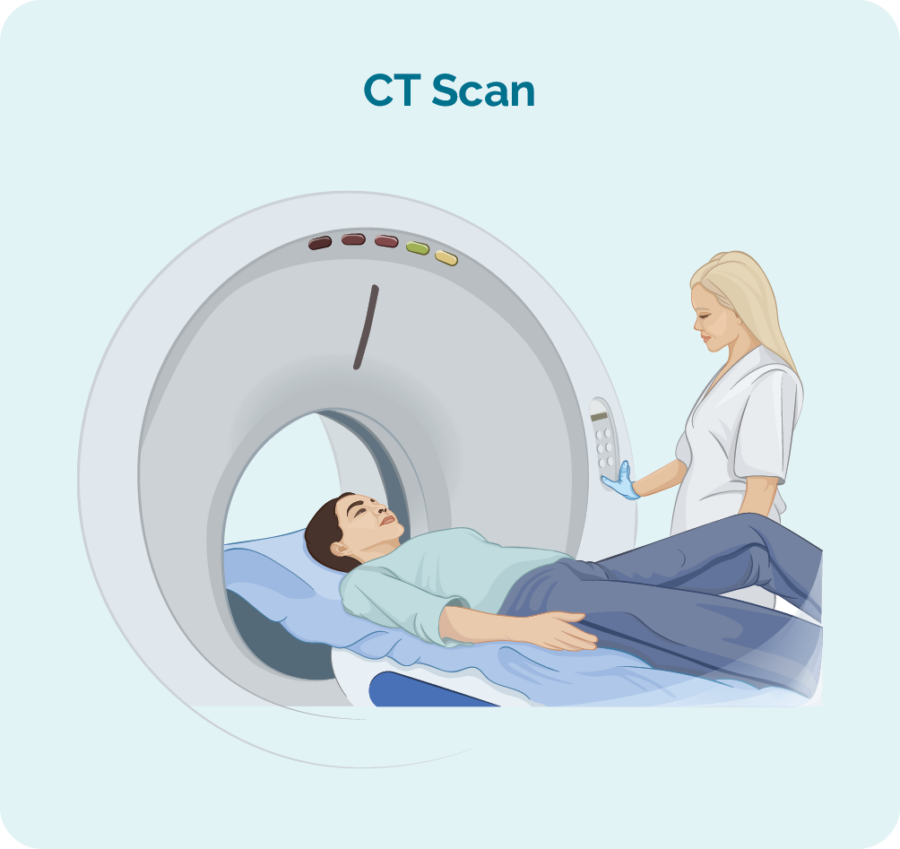 Before treatment starts you will need to be well enough to tolerate the toxic treatments. This can sometimes make it difficult to start, as most people with MEITL are quite unwell when first diagnosed. But your doctor will work with you, and keep a close on you to make sure your body can tolerate the treatment.

The first time you start treatment it is called first-line treatment.  Chemotherapy is the most common type of treatment you would have, and it is often followed by an autologous stem cell transplant.

Common chemotherapy protocols you may be offered are:

If you have a refractory lymphoma, or you have relapsed, you will need a second-line treatment.

Scroll over the card to learn more
In some cases, first-line treatment may not be as effective as hoped. When this happens your lymphoma is called "Refractory" meaning it has not gotten better with the current treatment.

Scroll over card to learn more
Complete remission means there are no signs of lymphoma left in your body that can be detected by scans and tests.

A partial remission means you still have lymphoma in your body, but it is less than half of what you had before starting treatment.

Scroll over the card to learn more
A relapse is when your lymphoma comes back, or begins to grow again after a time of complete or partial remission. This will result in you needing to start treatment again.

Treatment for Refractory or Relapsed MEITL

There are several different types of treatment your doctor may want to try if you have refractory or relapsed MEITL.

Some of the treatments include:

Treatments for Lymphoma and CLL

It is recommended that anytime you need to start new treatments you ask your doctor about clinical trials you may be eligible for. Clinical trials are important to find new medicines, or combinations of medicines to improve treatment of MEITL in the future.

They can also offer you a chance to try a new medicine, combination of medicines or other treatments that you would not be able to get outside of the trial. If you are interested in participating in a clinical trial, ask your doctor what clinical trials you are eligible for.

There are many treatments and new treatment combinations that are currently being tested in clinical trials around the world for patients with both newly diagnosed and relapsed MEITL.

Side effects of treatment will depend on the type of treatment you are having. Your haematologist or specialist cancer nurse will be able to talk to you about what to expect from your treatment and how to mange your symptoms, however some of the more common side-effects include:

Changes to your bowel motions, including diarrhoea or constipation.

Mouth ulcers, pain or changes to the way things taste.

Fatigue, which is extreme tiredness not improved with rest or sleep.

What to expect when treatment finishes

It can be an exciting time or a stressful time when you finish treatment – sometimes both. There is no right or wrong way to feel. But it is important to talk about your feelings and what you need with your loved ones.

Support is available if you are having a difficult time coping with the end of treatment. Talk to your treating team – your haematologist or specialist cancer nurse as they may be able to refer you for counselling services within the hospital. Your local doctor (general practitioner – GP) can also help with this.

You can also give one of our Lymphoma Care Nurses or email. Just click on the “Contact Us” button at the bottom of the screen for contact details.