The reason the term rescue can be used to describe an autologous stem cell transplant, is because when a lymphoma is not responding to treatment, or continually coming back after treatment stronger measures are needed to try and eradicate the lymphoma once and for all. This generally involves very high doses of chemotherapy.

These very high doses will kill the immune system (including the lymphoma). However, the consequences of such severe treatment means that the immune system will not be able to recover on its own, the autologous stem cells provide a rescue for the damaged immune system and help it get back up and functioning.

The aim of a stem cell transplant

There are a number of reasons why lymphoma patients may need a stem cell transplant including:

If the autologous stem cells were not administered, the immune system would be too weak to fight off any infections. Meaning that simple infections which a strong immune system barely notices, could lead to life-threatening infections and ultimately death.

The process of an autologous stem cell transplant

A stem cell transplant is an intensive form of treatment and there are only select hospitals in Australia that can provide this treatment. Therefore, in some cases it might mean relocating to the larger cities that the transplant hospital is located in.
It can take many months and sometimes even years for the immune system to fully recover after an autologous transplant. Most people undergoing an autologous stem cell transplant will be in hospital for 3 – 6 weeks on average. They are generally admitted to hospital a few days before the Transplant Day (the day the cells are reinfused) and stay in hospital until their immune system has recovered to a safe level.

The insertion of a central line

If the patient does not already have a central line, then one will be inserted before the transplant. A central line can be either a PICC (peripherally inserted central catheter) or it could be a CVL (central venous line). The doctor will decide what central line is best for the patient.

Only certain hospitals within Australia are able to carry out stem cell transplantation. Because of this, patients might need to relocate from their home to an area closer to the hospital. Some transplant hospitals have patient accommodation that the patient and the carer can live in. If you have a social worker at the treatment centre speak to them to find out more about accommodation options.

Stem cell transplantation may impact upon the ability to have children. It is important that patients discuss the options available to preserve fertility. If you have not yet had children or are wanting to continue your family it is best to speak to the medical team about fertility before the treatment begins.

Steve was diagnosed with mantle cell lymphoma in 2010. Steve has survived both an autologous and an allogeneic stem cell transplant. This is Steve’s story.

Practical tips to prepare for a transplant

Having a stem cell transplant usually involves a long hospital stay. It might be helpful to pack some of these things: 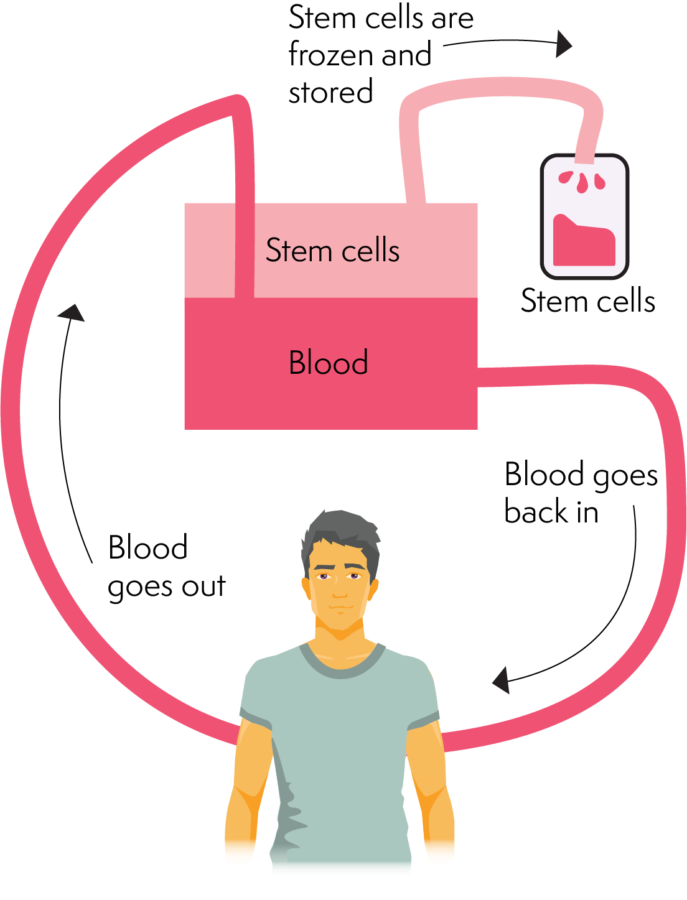 An apheresis machine separates different components of the blood. It does this by separating enough stem cells needed for a transplant. Apheresis involves inserting a cannula (needle/catheter) into a large vein in the arm or a vascath (special central line). The cannula or vascath helps blood travel out of the body and into the apheresis machine.

The machine then separates the stem cells into a collection bag. Once the blood has travelled through the cell collection phase. It travels back into the body. This process takes several hours (roughly 2 – 4 hours). Apheresis collection repeats over several days until the collection volume or enough stem cells are collected.

Peripheral stem cell collection doesn’t cause any ongoing pain. There is some discomfort from the needle (cannula or vascath) inserted into the vein. There can also be some mild ‘bone pain’ experienced due to the growth factor injections. This pain is generally well managed with oral paracetamol. Apheresis is the most common way to collect stem cells today.

There are many different combinations of chemotherapy and radiation therapy that can be used in conditioning regimes. The treating team will decide what conditioning regime is best for the patient. This will be dependent on the lymphoma subtype, treatment history and other individual factors such as age, general health and fitness.

Patients with co-morbidities and who are at a higher risk of complication, will generally have reduced intensity therapy. This is called a ‘reduced-intensity conditioning regime’. Conditioning therapy can be high-intensity or reduced-intensity. In both regimes the treatment is aggressive. As a result, a lot of healthy cells die along with the lymphoma.

Hospital admission often starts from the beginning of the conditioning therapy. Some conditioning therapies can be done in outpatient clinics but hospital admission will happen 1-2 days before transplant. Patients could be admitted to hospital for anywhere from 3-6 weeks. This is a guideline as every transplant is different and some patients will need more medical care for longer than 6 weeks.

For lymphomas, one of the most common conditioning regimes is a chemotherapy protocol called BEAM:

BEAM is administered in a hospital over 6 days before the patient’s own stem cells are given back. The drugs are given through the central line.

The countdown for having your stem cells back start from the day conditioning therapy is started. Day zero is always the day the cells are received. For example, if you were receiving the BEAM protocol that goes for 6 days, day one of this protocol is called day –6 (minus 6). It counts down each day with the second day known as day -5, etc., until you get to day 0 when the patient’s cells are given back.

After the patient receives their stem cells back, the days count upwards. The day after the cells are received is called day +1 (plus one), the second day is day +2, etc.

After the intensive chemotherapy has finished, the stem cells are reinfused. These stem cells slowly begin to produce new, healthy blood cells. Eventually, they will produce enough healthy cells to repopulate the whole bone marrow, replenishing all blood and immune cells.

With any medical procedure, there is a risk of having a reaction to the stem cell infusion. For most patients there is no reaction, but others might experience:

Engraftment is when the new stem cells begin to gradually take over as the primary stem cells. This generally happens around 2-3 weeks after the infusion of stem cells.

While the new stem cells engraft, the patient is at a very high risk of getting an infection. Patients generally have to remain in hospital for this period, because they can get sick and need to receive treatment immediately.

Side effects of conditioning chemotherapy

Patients are likely to experience side effects from the high-dose chemotherapy treatment. There is a separate section on the most common side effects of lymphoma treatment, including practical tips on how to cope with some of the common ones:

Post a stem cell transplant, the high doses of chemotherapy will have eliminated a lot of white blood cells, including a white blood cell called neutrophils, which causes neutropenia. Prolonged neutropenia puts patients at a very high risk of developing an infection. The infections can be treated, however if they are not caught early and treated immediately they can be life-threatening.

The first few days post the transplant are when patients are at the highest risk of developing a bacterial infection such as bloodstream infections, pneumonia, digestive system infections or skin infections.

In the next few months, patients are most at risk of developing viral infections. These might be viruses that were lying dormant in the body before the transplant and they may flare up when the immune system is low. They don’t always cause symptoms but regular blood tests after a transplant should identify a flare-up of a viral infection called cytomegalovirus (CMV). If the blood tests show CMV is present – even without symptoms – the patient will be treated with antiviral drugs.

Blood counts start to rise between 2 to 4 weeks after an autologous stem cell transplant. However, it can take many months, or sometimes even years, for the immune system to recover fully.

Patients should be advised when they go home what signs of infection to look out for and who to contact if there is a potential risk of an infection or anything else that is a worry for the patient.

Late effects are health problems that may develop months or years after the treatment for lymphoma has finished. Most transplant centres have dedicated late effects services that offer screening programmes to detect late effects as early as possible. This gives the patient the best chance of being treated successfully if any late effects develop.

The transplant team will advise what late affects patients are at risk of developing and what to do to reduce the risk of these developing. For more information, see ‘Late Effects’

Patients may also be at risk of developing post-transplant lymphoproliferative disorder (PTLD) – lymphomas that can develop in patients who are taking immunosuppressant drugs after a transplant. However, PTLD is rare and most patients who have had transplants do not develop PTLD. The transplant team will discuss any individual risks and any signs or symptoms to look out for.

After a stem cell transplant, patients will have regular appointments with their doctor. These appointments will decrease as time passes and recovery takes place. Follow up will continue for months and years after treatment, but less and less frequently as time passes. Eventually the transplant doctors will be able to hand the follow up care, over to your GP.

Approximately 3 months after the transplant, a PET scan, CT scan and/or bone marrow aspirate (BMA) may be ordered to assess how the recovery is going.

It is common to have to go back into hospital for treatment in the weeks and months that follow a transplant but as time goes on, the risk of serious complications decreases.

Transplant patients are also likely to be experiencing side effects from the high-dose treatment. Patients may sometimes feel unwell and very tired. It is important to take the time to recover from a stem cell transplant.

The medical team should give advice about other factors to consider during the recovery phase.

What happens after a stem cell transplant

You may already have a healthy lifestyle, or you may wish to make some positive lifestyle changes after treatment. Making small changes such as eating and increasing your fitness can improve your health and wellbeing and help your body to recover. There are many self-care strategies that can help you recover from treatment.